Poultry Responses to Management and Environment 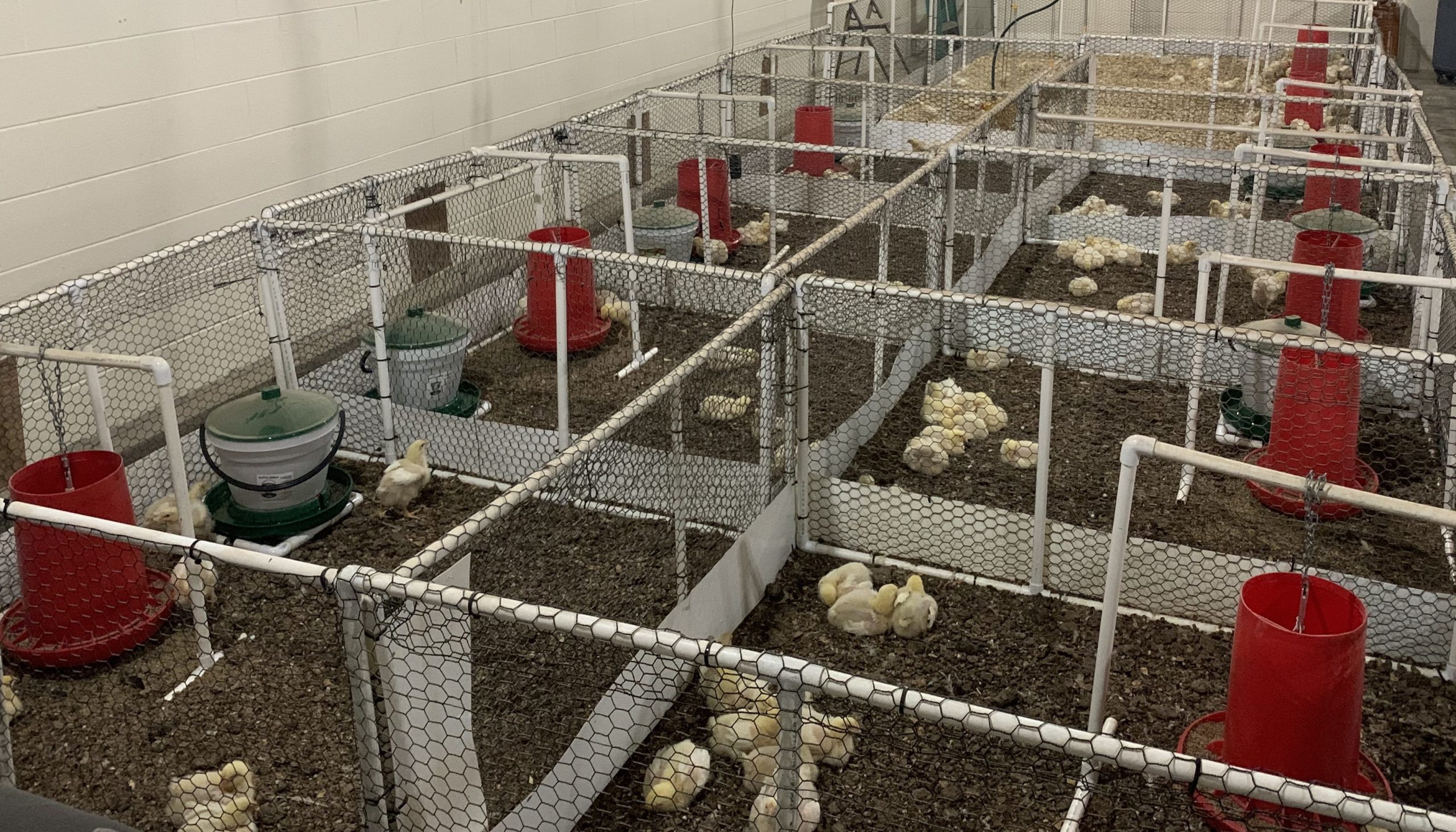 This study was conducted to assess the effects of the dietary supplementation of riboflavin (as a bile salt hydrolase [BSH] inhibitor) and Bacillus subtilis on growth performance and woody breast of male broilers challenged with Eimeria spp. Intestinal bacteria, including supplemented probiotics, can produce BSH enzymes that deconjugate conjugated bile salts and reduce fat digestion. A 3 × 2 × 2 (riboflavin × Bacillus subtilis × Eimeria spp. challenge) factorial arrangement of treatments in randomized complete block design was used. On d 14, birds were gavaged with 20× doses of commercial cocci vaccine (CoccivacR-B52, Merck Animal Health, Omaha, NE). Dietary treatment of riboflavin and B. subtilis did not affect body weight (BW), body weight gain (BWG), and feed conversion (FCR) d 0 to 14 and overall d 0 to 41. Eimeria spp challenge reduced BWG, feed intake (FI), and increased FCR between d 14 to 28, but increased BWG and lowered FCR between d 28 to 35. There were no effects of the Eimeria spp. challenge on the overall d 0 to 41 FCR and FI, but BWG was reduced. Eimeria spp. challenge increased the abdominal fat pad weight and slight woody breast incidences on processed birds on d 42. Dietary inclusion of B. subtilis and riboflavin at tested levels did not help birds to mitigate the negative impact of Eimeria spp. challenge to enhance the growth performance.

Abstract
While the effects of stocking density on broiler welfare and performance have been extensively and regularly studied as genetics and production models have evolved, feeder space recommendations has received less attention. Most feeder space data for broilers dates from the 1950’s and 1960’s, with relatively few assessments since, targeting market weights below 2.5 kg. This study examined live performance and yield in broilers reared to 56 d as influenced by provision of three feeder space allocations: 2.3 (nominal), 4.6, and 6.9 cm/bird. BW was significantly improved during the starter and grower phases as feeder space increased (P < 0.0001 and P = 0.0066, respectively); BW gain and feed consumption likewise improved in the starter phase (P < 0.0001 and P = 0.0002, respectively). Effects on live performance diminished in the finisher and withdrawal phases, however overall feed conversion ratio was significantly lower for 2.3 cm/bird when compared to 4.6 cm/bird (0.03 f:g, P = 0.0198). No significant differences were observed for carcass weight or yield, however abdominal fat weights and yield were reduced for 4.6 cm/bird as compared to 2.3 cm/bird (P = 0.012 and P = 0.016, respectively). The data herein illustrates that feeder space allowance affects broiler performance, particularly in early life. Expanded feeder space allowance during early life allows broilers to maximize productivity during this period, yet these effects appear to diminish in regards to BW and may be detrimental to overall feed conversion ratio. Further research is warranted to ascertain optimal expanded feeding space and duration during early life in commercial broilers.

Abstract
Providing adequate feeder space in broiler production is important to ensure bird performance and well-being; however, the effect of feeder space on behavior responses of broilers remains unclear. The objective of this research was to investigate feeding behaviors of broilers provided with 4 feeder spaces, that are 2.3 cm/bird with one feeder (2.3FSO); and 2.3, 4.6, and 6.9 cm/bird with 3 feeders (2.3FST, 4.6FST, and 6.9FST, respectively). Number of feeder slots per feeder was 14 at 2.3FSO, 5 at 2.3FST, 9 at 4.6FST, and 14 at 6.9FST. Sixteen identical pens, each with 45 broilers (Ross 708, mixed sex), were used to accommodate the 4 feeder space treatments. Feeding behaviors were continuously monitored from weeks 4 to 8 using an ultra-high-frequency radio frequency identification system. The results show that the daily feeding time and number of feeder visits for broilers at 2.3FST were similar to those at 4.6FST and 6.9FST but higher than those at 2.3FSO (P < 0.01). The feeder utilization ratio was the highest at 2.3FST, indicating the feeder being used most efficiently among the 4 treatments (P < 0.01). Coefficient of variations (33.0–65.1%) of the feeding behavior responses was similar among the treatments (P ≥ 0.06), suggesting similar group uniformity of feeding behaviors of individual broilers. Feeders among all treatments may not be fully used because for most of the time, less than 6 birds chose to eat simultaneously at a more-than-five-slot feeder in all treatments. Given the same feeder space, increasing feeder number can accommodate more birds to eat simultaneously. The outcomes of this study provide insights into improvement of feeder design and management for broiler production. 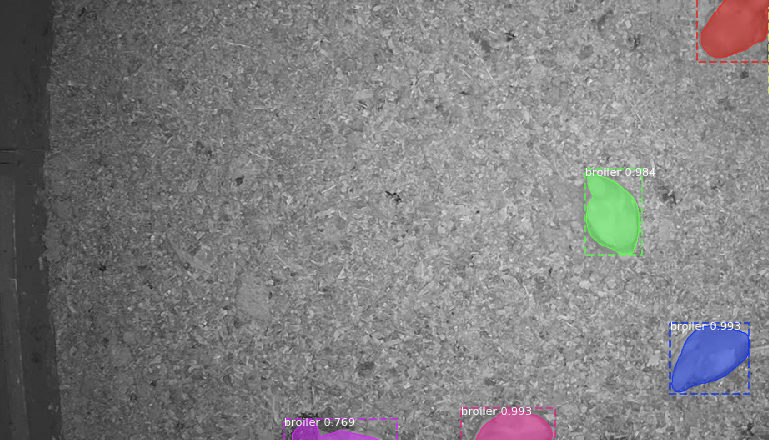 Abstract
Audio data collected in commercial broiler houses are mixed sounds of different sources that contain useful information regarding bird health condition, bird behavior, and equipment operation. However, characterizations of the sounds of different sources in commercial broiler houses have not been well established. The objective of this study was, therefore, to determine the frequency ranges of six common sounds, including bird vocalization, fan, feed system, heater, wing flapping, and dustbathing, at bird ages of week 1 to 8 in a commercial Ross 708 broiler house. In addition, the frequencies of flapping (in wing flapping events, flaps/s) and scratching (during dustbathing, scratches/s) behaviors were examined through sound analysis. A microphone was installed in the middle of broiler house at the height of 40 cm above the back of birds to record audio data at a sampling frequency of 44,100 Hz. A top-view camera was installed to continuously monitor bird activities. Total of 85 min audio data were manually labeled and fed to MATLAB for analysis. The audio data were decomposed using Maximum Overlap Discrete Wavelet Transform (MODWT). Decompositions of the six concerned sound sources were then transformed with the Fast Fourier Transform (FFT) method to generate the single-sided amplitude spectrums. By fitting the amplitude spectrum of each sound source into a Gaussian regression model, its frequency range was determined as the span of the three standard deviations (99% CI) away from the mean. The behavioral frequencies were determined by examining the spectrograms of wing flapping and dustbathing sounds. They were calculated by dividing the number of movements by the time duration of complete behavioral events. The frequency ranges of bird vocalization changed from 2481 ± 191–4409 ± 136 Hz to 1058 ± 123–2501 ± 88 Hz as birds grew. For the sound of fan, the frequency range increased from 129 ± 36–1141 ± 50 Hz to 454 ± 86–1449 ± 75 Hz over the flock. The sound frequencies of feed system, heater, wing flapping and dustbathing varied from 0 Hz to over 18,000 Hz. The behavioral frequencies of wing flapping were continuously decreased from week 3 (17 ± 4 flaps/s) to week 8 (10 ± 1 flaps/s). For dustbathing, the behavioral frequencies decreased from 16 ± 2 scratches/s in week 3 to 11 ± 1 scratches/s in week 6. In conclusion, characterizing sounds of different sound sources in commercial broiler houses provides useful information for further advanced acoustic analysis that may assist farm management in continuous monitoring of animal health and behavior. It should be noted that this study was conducted with one flock in a commercial house. The generalization of the results remains to be explored. 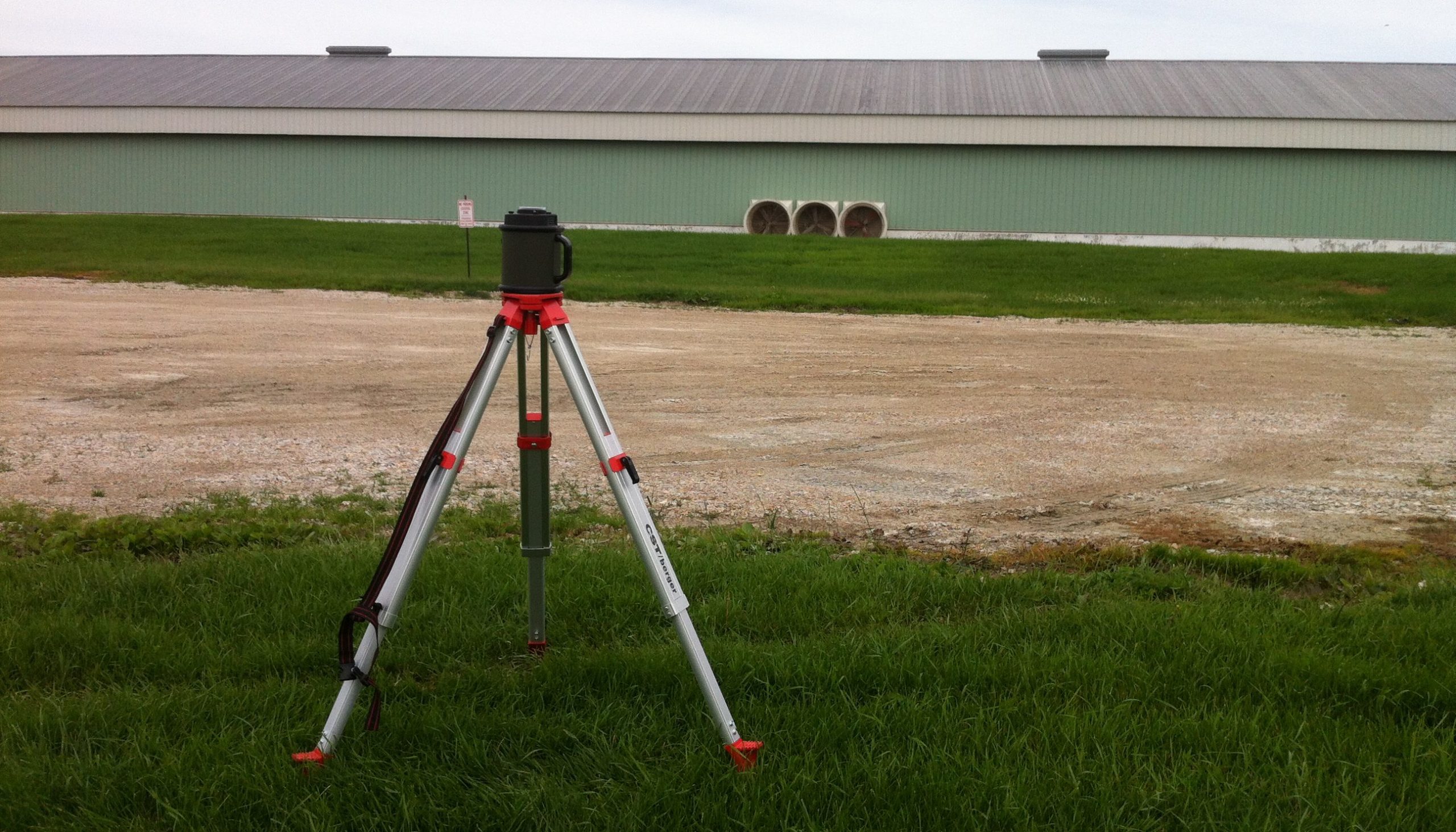 Abstract
Disinfecting shell egg transport tools such as egg flats and pallets before their reuse has become an integral biosecurity step after the 2015 highly pathogenic avian influenza (HPAI) outbreaks in the United States. Lab-scale tests and field verification were conducted to investigate dynamic temperature changes and distributions inside stacks of egg pallet and flat at a surrounding air temperature of 54C to 60C (130ºF to 140ºF) in this study. The heat treatment tests were conducted in the lab first, and then verified in a newly built heat treatment room [12 m (L) x 4 m (W) x 3 m (H)] on a commercial laying hen farm in Iowa, the largest egg production state in the United States. Iowa lost more than 30 million hens during 2015 outbreak of HPAI. The lab tests proved that air circulation with fans could accelerate the heat exchange between air and stacks; blowing air from top and bottom at the same time plus arranging a 2.5 cm (1 in.) space between stacks could reduce the heat treatment time for the target temperature zone (i.e., 54ºC to 60ºC) from 26 to 60 h (without air circulation) to 7 to 9 h. For commercial egg farm tests, heat treatment results show that the room air and egg pallet stacks temperature reached the target zone (54ºC to 60ºC) in 30 min and 4 h after starting the heater, respectively. However, the temperature of egg flat stacks failed to reach the targeted zone after 8 h heating, because it had larger volume and heat transfer resistance as compared to egg pallet stacks. Further experiments such as extending heating period and installing mixing fans to accelerate heat exchange between the room air and the stacks are suggested for improving heat treatment system design on commercial farms.

Abstract
The unprecedented 2015 outbreaks of highly pathogenic avian influenza (HPAI) H5N2 in the U.S. devastated its poultry industry and resulted in over $3 billion economic impacts. Today HPAI continues eroding poultry operations and disrupting animal protein supply chains around the world. Anecdotal evidence in 2015 suggested that in some cases the AI virus was aerially introduced into poultry houses, as abnormal bird mortality started near air inlets of the infected houses. This study modeled air movement trajectories and virus concentrations that were used to assess the probability or risk of airborne transmission for the 77 HPAI cases in Iowa. The results show that majority of the positive cases in Iowa might have received airborne virus, carried by fine particulate matter, from infected farms within the state (i.e., intrastate) and infected farms from the neighboring states (i.e., interstate). The modeled airborne virus concentrations at the Iowa recipient sites never exceeded the minimal infective doses for poultry; however, the continuous exposure might have increased airborne infection risks. In the worst-case scenario (i.e., maximum virus shedding rate, highest emission rate, and longest half-life), 33 Iowa cases had > 10% (three cases > 50%) infection probability, indicating a medium to high risk of airborne transmission for these cases. Probability of airborne HPAI infection could be affected by farm type, flock size, and distance to previously infected farms; and more importantly, it can be markedly reduced by swift depopulation and inlet air filtration. The research results provide insights into the risk of airborne transmission of HPAI virus via fine dust particles and the importance of preventative and containment strategies such as air filtration and quick depopulation of infected flocks. 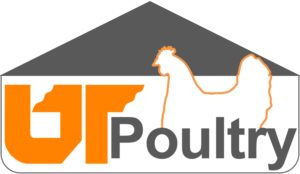